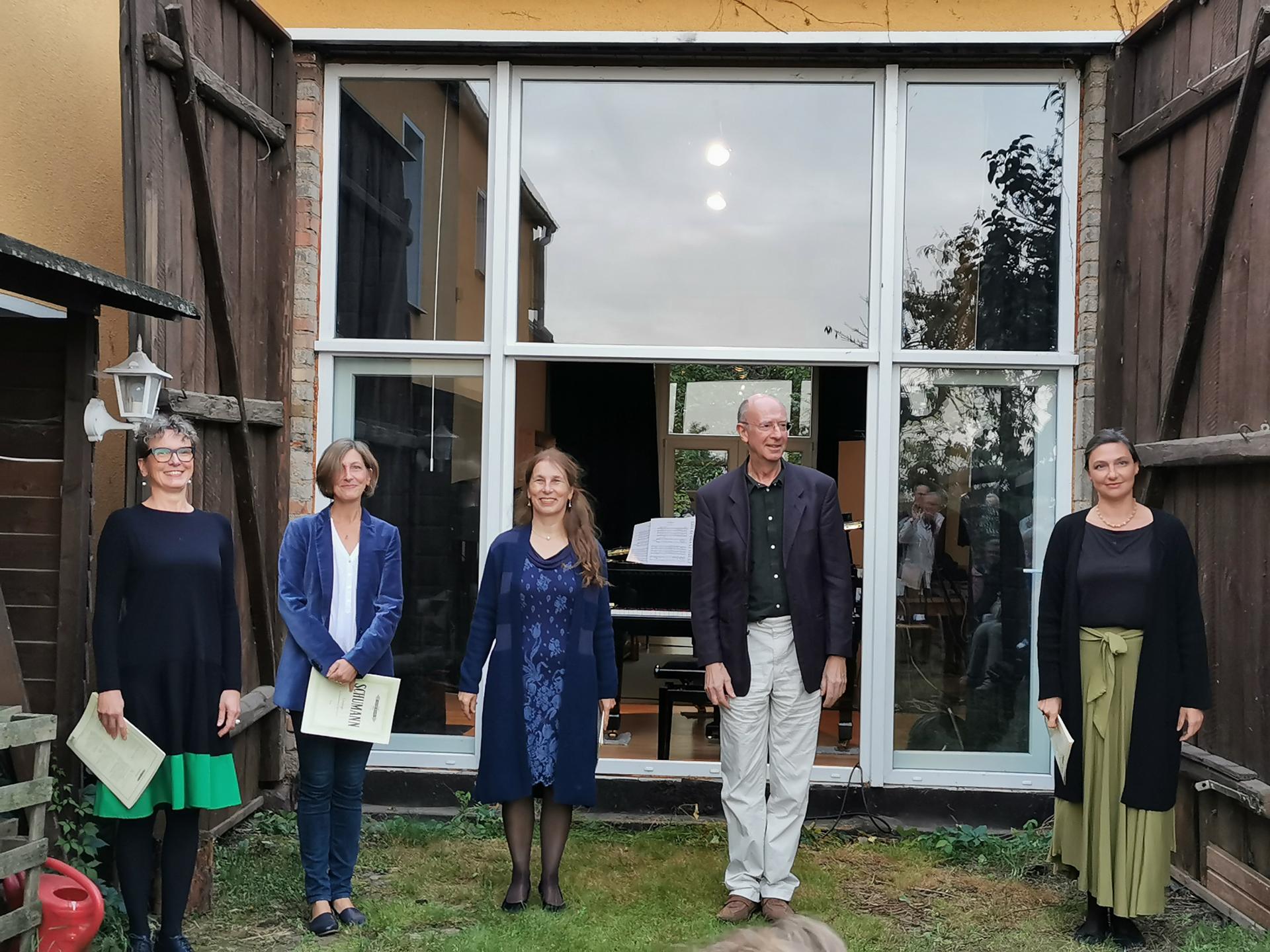 Schlenzer is an artistic village. Three painters and a photographer live in Schlenzer, but so does James, a composer, who lives next door to Sabine, a singer. Anke is a cellist and gambist, Susanne sings in various choirs and plays the renovated church organ together with Vroni, Christoph and Wolfgang are guitarists in rock bands.

They perform in concert halls and cathedrals. Normally. But now is not normally. So we shift to the pub hall, James' yard, the meadow in front of the sportsmen's home and the village church.

The pub "Zum Berg" has a very unusual hall with a stage that can seat 200 to 300 people, depending on the mood and incidence. Already in GDR times, groups like The Matadors, Scirocco, Stern-Combo Meißen and even Karat performed, or so Monika says, and brought the hall to a boil. This long tradition will continue. Among others, Christoph has played there with his band Dr. Hank. For years (2009, 2011 and 2014) Bine and Andrea, accompanied by James, gave great song recitals on the village piano.

Hedda had her own personal surprise in 2019 when she was "given" the Rundfunkchor Berlin to sing "Es ist ein Ros entsprungen" for her in the village church during Advent.

When culture 2020 came to a standstill because of Corona, we resorted to self-help. Sabine rehearsed Alban Berg's "Seven Early Songs" in her home office, James sat down at the grand piano, and so the first - purely private - garden concert took place on July 4th. For the Day of German Unity on October 3rd, the two got support from Annerose, Christine and Christina. Together they sang songs by Clara and Robert Schumann, Johannes Brahms and Franz Schubert.

Finn and his group "Punktlandung" and Martin and Dominic had already caused a stir at the sportsmen's home with the first public performance of their newly founded band "Im Kern". To be continued! 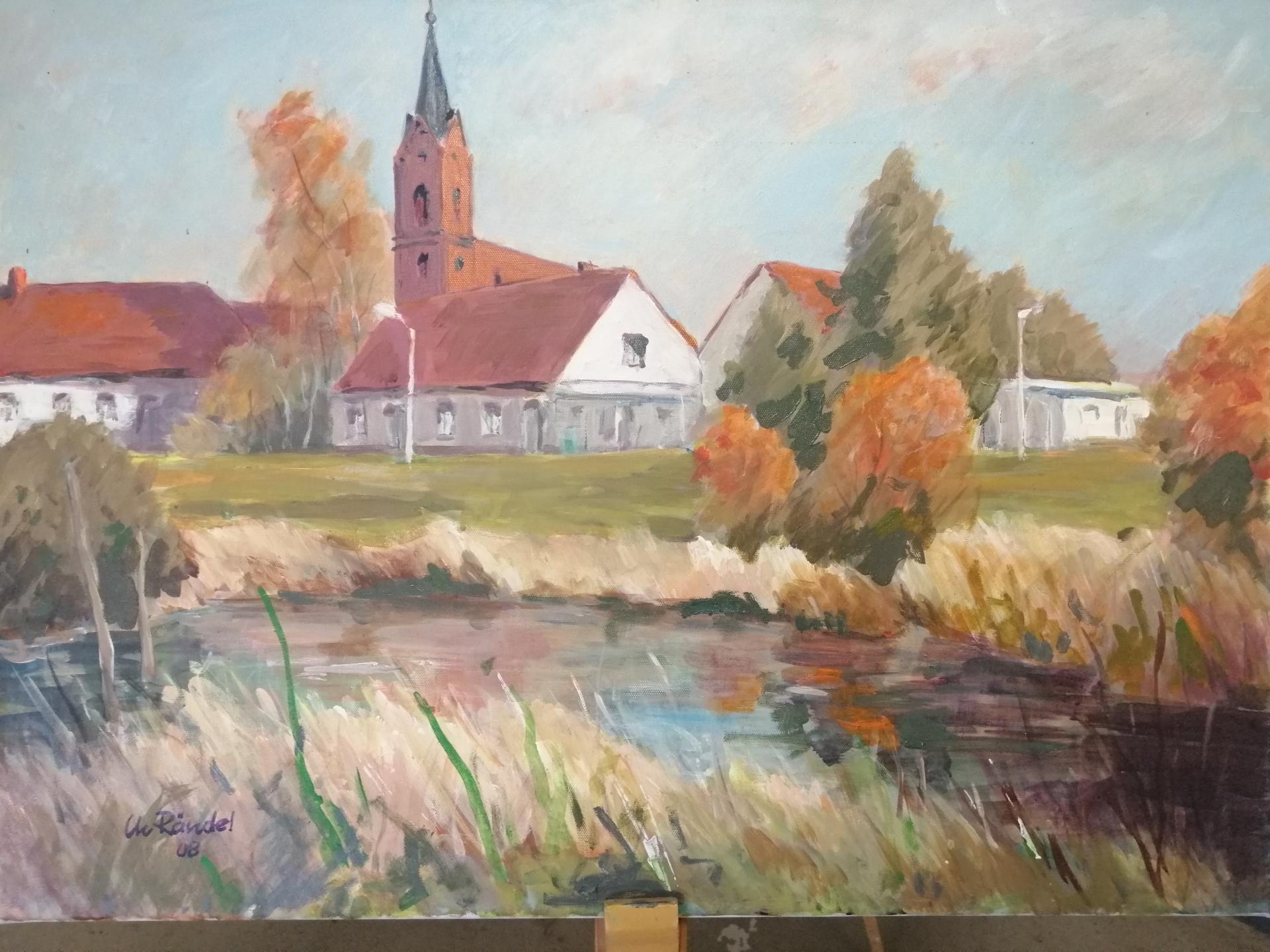 Painting: Exhibition in the sports club house on the occasion of the 80th birthday of Christfried Rändel

What better way to honour a painter than with an exhibition that is at the same time a retrospective and shows his work from childhood to the present day. Thus, on 10/11 July 2021, part of his extensive oeuvre was exhibited in the hall of the sports club home, which is currently being renovated - art on the building site, so to speak. Together with about 100 visitors we celebrated the event.

Due to his inclination and talent and the impulse of his namesake Christfried, the pastor's son, he had initially considered studying art at the Weissensee School of Art, but then decided to study English, French and Russian to become a teacher. After studying at the Humboldt University in Berlin, he worked for many years with his wife as a teacher at the school in Lauchhammer, and later at the Wiesenschule in Jüterbog. Teaching was his vocation, but his passion remained painting. He worked with different techniques such as watercolour, acrylic and oil, but also linoleum and woodcut, attended courses with Prof. Schamal and Jürgen Melzer and also devoted himself to portrait painting.

Thematically, he has remained true to himself. He brought back many motifs from his travels, a recurring motif being Schlenzer and its surroundings. The logo of the mountain village, the village signs with which visitors are welcomed and bid farewell on the Fläming Skate, and the two large-format boards for the annual village festival, which were also on display at the exhibition, are also part of his oeuvre. Thus he is always visually present in the village.

The focus of his life and work is his family, especially his wife Almuth, whom he has drawn and painted time and again. He has also captured friends and "local greats", such as the local hero August Krause, on canvas.