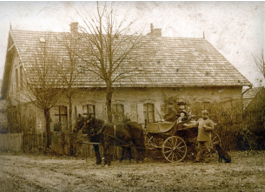 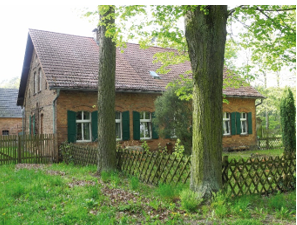 Around 1890, the forestry administration of Stülpe built a new forester's lodge. It is located about 2.5 km north-west of Schlenzer. The forester's house, two stable buildings and a somewhat remote baking oven belong to the forester's house. Many people found work here. In winter, once or twice there was "wood day", when wood was cut. In the evening, the men could transport a load of wood home with the dog cart. But since the road to Schlenzer was uphill, the women and older children had to come with "Träckegurten" (carrying straps) and help pull. The smaller stable building is a brick half-timbered structure. The baking oven is a fieldstone building with a clay coating. Somewhat off to the side there is also a small cemetery where, among others, residents of the forester's lodge were buried.

The church register of 1763 shows that Johann Hiltmann was the sexton and schoolmaster in Schlenzer at that time. It is documented that the schoolhouse No. 59a was built in 1814 as a half-timbered house with a thatched roof. The classroom where all classes were taught was the large parlour to the left of the entrance. In 1844, the boys received their first gymnastics lessons. Since the teacher had no land, he was granted grazing rights for 2 cows, 2 pigs and 1 goose, as 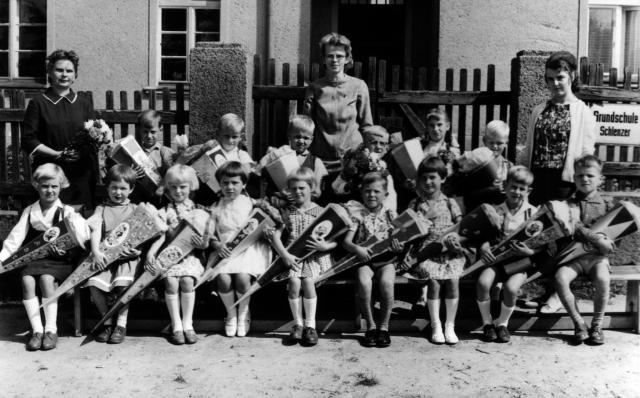 well as bees, pigeons and silkworms. He also had the right to fetch wood for breaking and reading from the peasant forest. It was not until after the separation (land consolidation) in 1868 that the school also had land and forest entered in the land register. This land was farmed by the teacher himself. In 1860 a new school class was established. In 1886, 110 children attended classes here: 41 from Riesdorf and 69 from Schlenzer. In 1926/27, the school board decided to apply to the government in Potsdam for a new school building. On 20 May 1930, the new school building was consecrated. Children from Schlenzer, Riesdorf and Sernow were taught here until the mid-1970s. Nowadays the children from Schlenzer go to school in Werbig. In the meantime, the school rooms were used by clubs. For some years now, children's voices can once again be heard in the rooms, which are used by the residential home "Neuer Weg" (new way) of the welfare organization “Arbeiter-Samariter-Bund”. 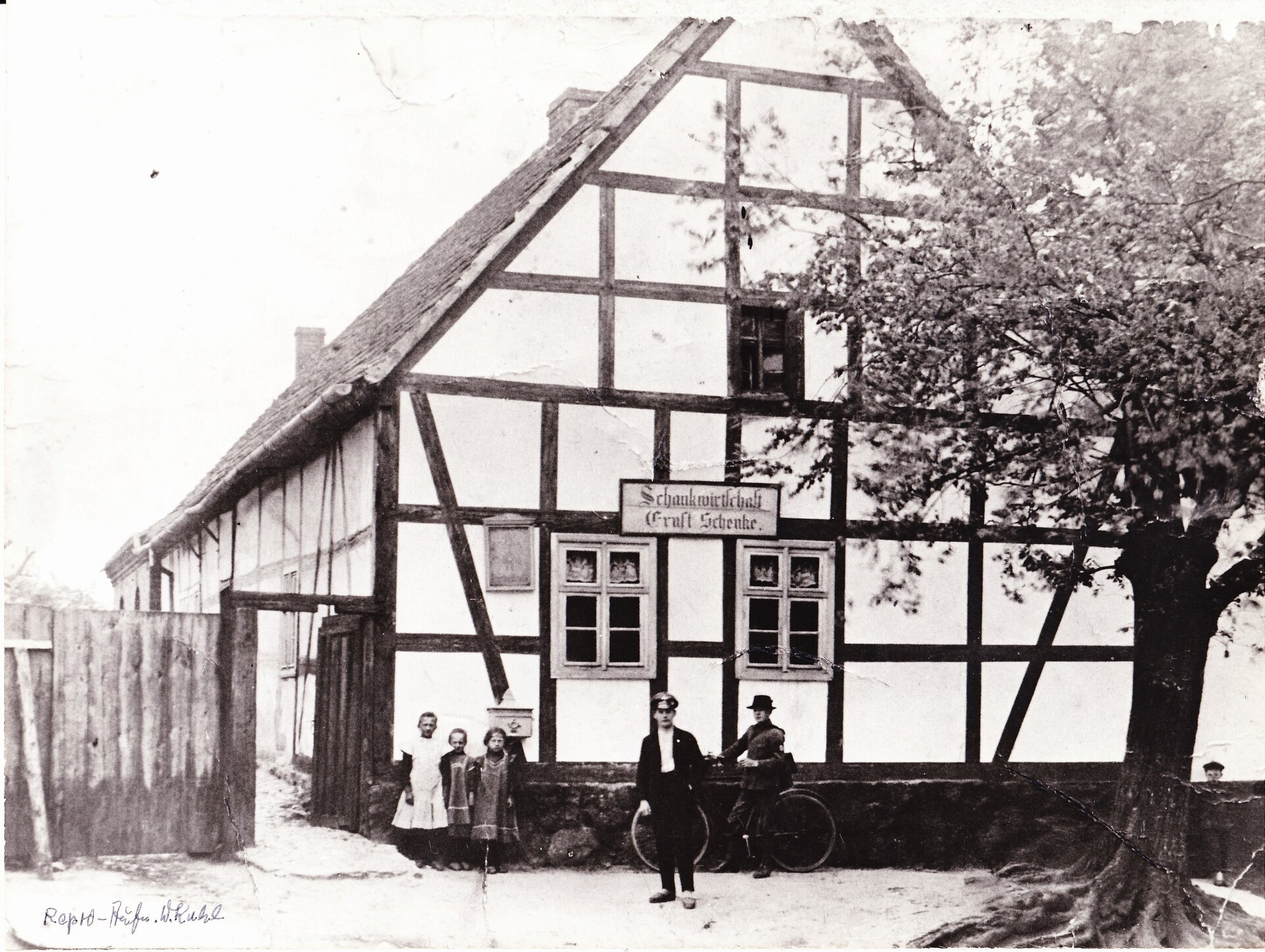 Next to the church, the village pub or inn is the focal point in most villages. This applies all the more to the inn in Schlenzer, because its long tradition and especially the feasts held here have made it famous far beyond the village. Even in other parts of Brandenburg, the mention of Schlenzer brings back old memories of youth: From the 1960s onwards, the pub hosted almost legendary dance events and concerts. Guests would travel long distances to attend, and the village street was full of vehicles of all kinds on these evenings. Some of the guests were picked up by the landlord in a minibus in the more distant villages. With its large dance hall with stage adjoining the actual pub, the premises are perfectly suited for such events. Even cinema shows were given here as part of the "Landfilm" (rural movie). There was also a bowling alley. Since 1875, the pub has now been run by the fifth generation. Until after the war, there was also a small shop and a post office in the northern part of the building. A dent can still be seen in the floor where the heavy sauerkraut barrel used to stand. When the Soviet troops came to Schlenzer at the end of the war, the innkeeper's family had to vacate the inn for three weeks and found accommodation in the attic and with relatives in the neighbouring house. The soldiers turned the small cellar bar into a "banya" and danced around a large picture of Hitler in the hall. For the troops stationed in the area, the pub became a popular meeting place in later years.

Much has changed since then: The pub got a terrace, where excursionists also like to linger over a schnitzel and a beer. The range of comfortable rooms has also been expanded in recent years, as more and more guests come from far away to use the "Fläming Skate" that runs through the village. Even though the great days of dance events are over, many parties are still celebrated in the inn. In addition to family celebrations, the summer courtyard party and meetings of the hunters, these include, above all, Shrovetide with subsequent Zempern at the end of January. In earlier times, it was customary to interrupt the dancing around midnight to have a hearty meal at home before returning to the dance hall with homemade pancakes and clamp cake. Today, the pub provides the culinary catering. And you can get homemade pancakes too. 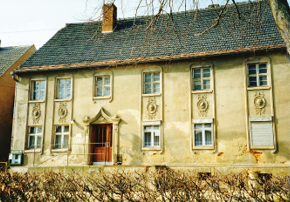 The Former Village Shop, the “Konsum”

Until the beginning of the 1950s, the people of Schlenzer were able to buy everyday necessities on plot No. 1. Later, this was possible at the Konsum, Dorfstr. 4. Here the premises were larger. The shop assistants tried, as far as possible, to order goods to supply the villagers. Nevertheless, it was often the case that the food or the required quantity was not delivered.

At the holidays, one had to place one's order in time to have, for example, roulades or even Vienna sausages on the holiday table. Oranges and bananas at Christmas were available on allocation, as were tomatoes or the occasional green cucumber in spring. In the hot summer months, shortages of drinks were not uncommon. In addition to the grocery store, the municipal office with its mayor and secretary was also housed in the building. In 1972, a hairdressing salon was set up to the left of the entrance. In the same year, a library room was added, where the books that had previously been stored in the municipal office were clearly arranged and available for everyone to borrow free of charge. In 1991, the Konsum was closed. Since then, this building has been used as a residential building and has changed hands several times. In 2012, it was extensively renovated and is now a jewel of the village. 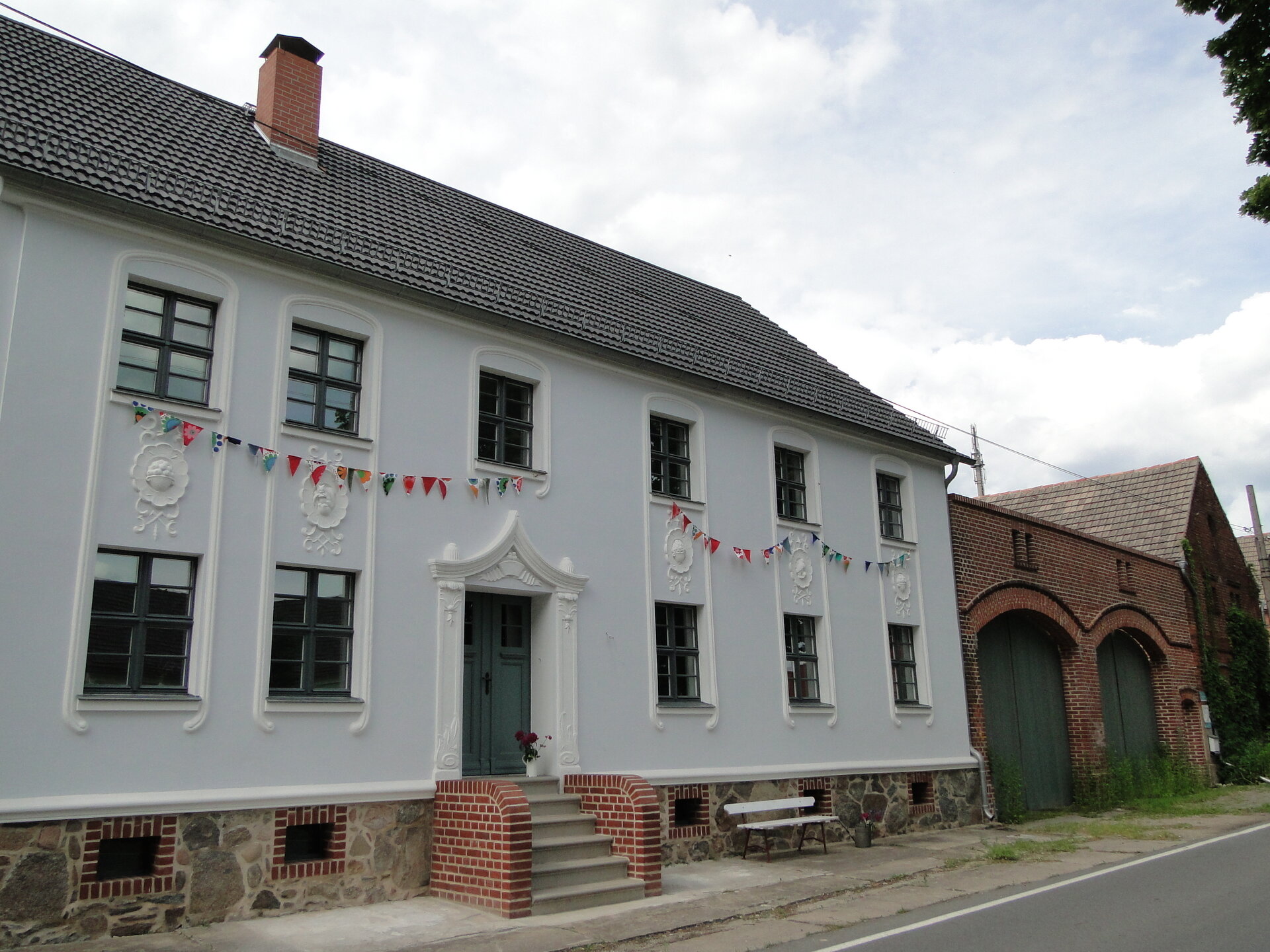 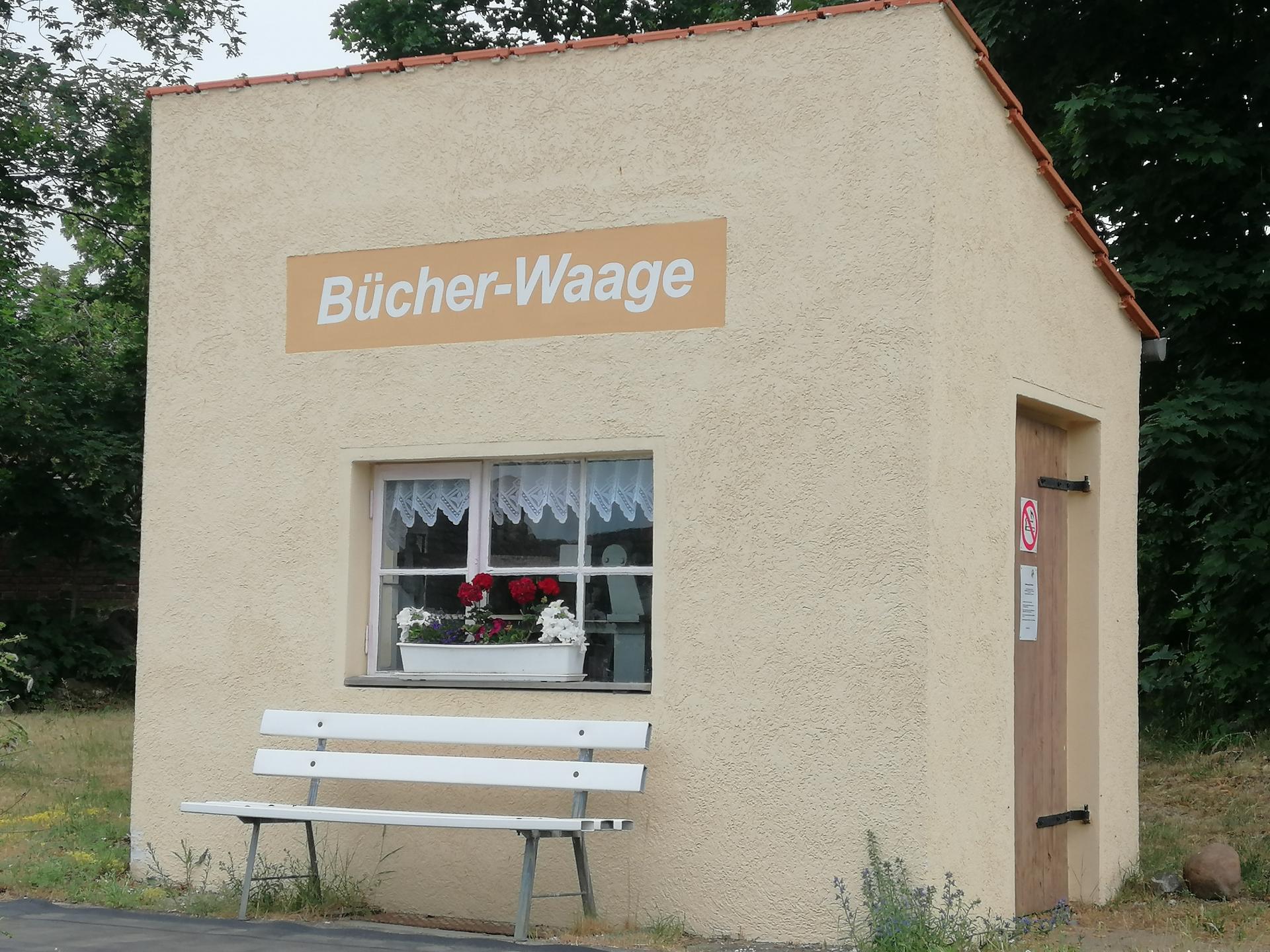 In 2017, residents were surprised by the news that the old LPG scale was to be demolished; the scale was no longer needed and posed an accident hazard. Yes, that was true, but why demolish a functioning scale with its little house? After many telephone calls and consultations in the village, the project of a book scale was born: Shelves were built into the little house, the citizens brought books of all genres, no trash, companies from the region helped with the implementation: a mini-library was created.

Since May 2018, it has been located directly at the Fläming Skate and attracts citizens from Schlenzer and skaters to visit.